You are here: Home / Thailand Tour
Previous
Next

For the past 7 years Triangle Travel have been escorting their own tours. Countries
visited include China, Peru, Argentina, Brazil, India – this year we have just returned from Japan.

Triangle Trips are different to other tours that are on the market because:
Destination
Highlights

Depart from London Heathrow onboard Thai Airways TG 917 flight to Bangkok at 21:35. The flight is direct and takes 11h 25m.

Ariving in Bangkok at 16:00, you will quickly clear customs and
immigration and be met in the arrivals hall by your tour leaders, Rob and Sarah and your
local guide. You will transfer to your five-star hotel in an air-conditioned vehicle, and then
have time to rest and relax.

After breakfast at the hotel visit three of Bangkok’s most famous temples, plus the iconic
Grand Palace. The first on the tour; Wat Trimit houses a houses a 700-year-old, three-meter
tall golden statue, cast from five-and-a-half tons of solid gold which makes it the world's
largest solid gold statue. Wat Pho features one of the largest reclining Buddha images in
Thailand. It is also known as the birthplace of traditional Thai massage. The Temple of the
Emerald Buddha, situated in the Grand Palace complex, otherwise known as Wat Phra
Kaew is regarded as the most sacred temple in the kingdom. It is home to the Emerald
Buddha, a dark green statue which has been carved from a single jade stone. The former
residence of the King, the Grand Palace, adjoins the temple. Afternoon is at leisure.

Today’s tour provides a fascinating insight into Thailand’s Second World War history. The
infamous bridge and the “Death Railway” is a poignant reminder of the thousands of POW’s
and forced Asian labourers who lost their lives in the Second World War during the
construction of the railway.
Visit the interactive museum and research centre dedicated to the history of the “Death
Railway”. This fascinating attraction offers an educational insight into the history of the area.
We also visit the War Cemetery which contains the graves of an estimated 9,000 Allied
soldiers who lost their lives building the bridge and the notorious railway. Another highlight of
this excursion is a long-tail boat trip to view the bridge up close. We continue by road to
Wang Po for lunch at a local restaurant and then board a train for a thrilling ride along the
infamous railway.

After breakfast transfer by coach to Bangkok Airport to board Thai Airways flight to Hoi Chi
Minh City. After immigration and custom clearance, you will be met by your Vietnam tour
guide who will transfer the group by private coach to the hotel. The rest of the day at leisure.

After breakfast drive to the fascinating Cu Chi tunnel networks, established as a means of
waging guerrilla warfare against superior French, then later American firepower. Rest of the
afternoon is at leisure.

Morning bid farewell to the hustle and bustle of Saigon and travel 70 kilometers south
overland to My Tho to embark on your luxury floating home the RV Jayawarman for the
upcoming 7 night journey along the Mighty Mekong from Saigon (Vietnam) to Siem Reap
(Cambodia).

This morning visit the Cai Be floating market full of colour, noise and vivacity! Later hop on a
traditional boat to explore the vast labyrinth of waterways of the Mekong to visit a local
village

After breakfast, city tour of this dynamic, historical capital of Cambodia, with its delightful
French colonial charm. Sightseeing in the morning will include the dazzling white and gold
architecture of the Royal Palace and the outstanding displays of Khmer crafts at the National
Museum. After lunch in a local restaurant, explore Cambodia’s heartbreaking past under the
Khmer Rouge regime, with an excursion to the infamous ‘Killing Fields’: the former detention,
torture and execution centres during the Cambodia civil war. Introduction and lecture by a
local history professor. Return to the ship and relax watching a Cambodian traditional
Apsara dance performance.

The ship cruises along the narrow Tonle River towards Kam-pong Chhnang, Cambodia’s
“water world”, where everything is on sticks and balanced on water-rich soil. Perhaps it’s the
most fascinating cruising spot in Cambodia.

This morning visit the island of Koh Oknha Tey which is famous for silk production. Explore
the island with its workshops and learn how silk is processed from its source, provided by
little silk-worms, to a final top quality product made of original Cambodian silk. Back on
board all passengers will have the opportunity to join a Monks’ blessing ceremony.

Early morning start to embark on a journey upriver to the pre Angkorian Temple of Wat
Hanchey. Located at the top of a hill overlooking the river, it offers some of the best views in
Cambodia. Dating from the 8th C. these ancient structures do more than justice to the
architecture of the Chenla Empire, predating the glories of the mighty Angkor. Later visit Wat
Nokor, a Wat built within the ruins of an ancient Temple. This evening enjoy a farewell dinner
on board

After breakfast disembark the ship for a transfer by coach to the drop off point in Siem Reap.
The transfer takes about 4.5 hours. Snacks are provided during the trip. You will arrive in
Siem Reap in the early afternoon.

This morning visit the monumental magnificence of Angkor Thom – the last capital of the
great Khmer Empire. You will visit the sprawling Elephant Terrace, the Terrace of the Leper
King and the enchanting Bayon. This 12th century masterpiece lies at the very centre of
Angkor Thom City and is an archaeological wonder of symmetry and grandeur. The exterior
gallery walls have extensive bas-reliefs but the main features are the towers each with 3 or 4
gently smiling faces, over 200 in total.. PJ de Beerski wrote of them; “godliness in the
majesty and the size, mystery in the expression.”
Continue your exploration of the Angkor Temples at Ta Prohm, the temple that has been left
largely in its natural state since its “re-discovery” by French explorers. Surrounded by jungle,
its labyrinth of stone hallways is overgrown with the roots and limbs of massive banyan
trees, which envelop the stone like tentacles. Lunch at local restaurant
This afternoon, you will visit Angkor Wat, the largest temple in the world, with a volume of
stone equalling that of the Cheops pyramid in Egypt. It is unlike all the other Khmer temples
in that it faces west, and is inspired by 12th Century Hinduism. Its symmetrical towers are
stylized on the modern Cambodian flag. Conceived by Suryavarman II, Angkor Wat took an
estimated 30 years to build. It is generally believed to have been a funeral temple for the
king. Sunset at Angkor Wat

Day of leisure to explore Siem Reap on your own 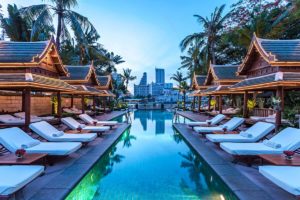 The luxury hotel lies on the western bank of the Choa Phraya River, the ancient River of the Kings, close to the Sathorn Bridge. A private ferry service links the hotel with the River City Complex as well as further shopping facilities and entertainment venues on the other side of the river. 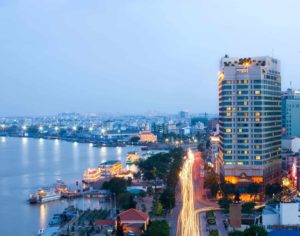 This exclusive luxury hotel is located at the heart of Ho Chi Minh City, just a few minutes from the town centre where guests will discover a wide selection of shopping and entertainment venues.
Wonderful panoramic views are to be had over the Saigon River from the hotel.

With three-and-a-half decks, Jayavarman is as spacious as it is beautiful. Guests can admire Khmer artifacts in the Henry Mouhot Lounge, mingle in the Club 1930 Bar, dine in the elegant Indochine
Dining Hall, and recharge with spa treatments in the Apsara Spa. A Jacuzzi pool is located on the top sun deck, which offers spectacular views of the passing delta. 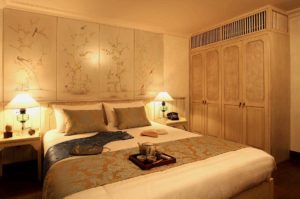 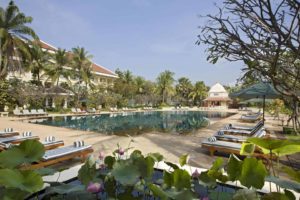 With its centenary fast approaching, the iconic Raffles Grand Hotel d’Angkor is very much part of the history and scenery of Siem Reap.
The hotel is a commanding sight as you draw near, oozing an air of refined luxury that continues as you step through the impressive entrance and into the lobby. Styled in an eclectic manner, much
like Siem Reap itself, Raffles Grand Hotel d’Angkor proudly showcases many aspects of this ancient city and the people who have passed through it. Art Deco curves flawlessly mingle with Cambodian motifs and colonial furnishings, not to mention the original wooden elevator, which is still very
much in use. That being said an incredibly modern feel prevails throughout, thanks to several renovations over the years.

Prices
£5,499 Per Person for a Twin/Double room
£2353 Per Person Single Supplement
Club Class and First Class prices on application
Cost Includes:
Cost Does Not Include:
Thailand Beach Extension
If you wish to extend your holiday why not spend some time on the beach in one of the many destinations Thailand has to offer.

to make a booking or if you would like more information, contact sarah kenton on 01491 825155, or complete the form below and we'll get back shortly.

We use cookies on our website to give you the most relevant experience by remembering your preferences and repeat visits. By clicking “Accept All”, you consent to the use of ALL the cookies. However, you may visit "Cookie Settings" to provide a controlled consent.
Cookie SettingsAccept All
Manage consent

This website uses cookies to improve your experience while you navigate through the website. Out of these, the cookies that are categorized as necessary are stored on your browser as they are essential for the working of basic functionalities of the website. We also use third-party cookies that help us analyze and understand how you use this website. These cookies will be stored in your browser only with your consent. You also have the option to opt-out of these cookies. But opting out of some of these cookies may affect your browsing experience.
Necessary Always Enabled
Necessary cookies are absolutely essential for the website to function properly. These cookies ensure basic functionalities and security features of the website, anonymously.
Functional
Functional cookies help to perform certain functionalities like sharing the content of the website on social media platforms, collect feedbacks, and other third-party features.
Performance
Performance cookies are used to understand and analyze the key performance indexes of the website which helps in delivering a better user experience for the visitors.
Analytics
Analytical cookies are used to understand how visitors interact with the website. These cookies help provide information on metrics the number of visitors, bounce rate, traffic source, etc.
Advertisement
Advertisement cookies are used to provide visitors with relevant ads and marketing campaigns. These cookies track visitors across websites and collect information to provide customized ads.
Others
Other uncategorized cookies are those that are being analyzed and have not been classified into a category as yet.
SAVE & ACCEPT
Powered by